The Breakdown of an Atomic Habit 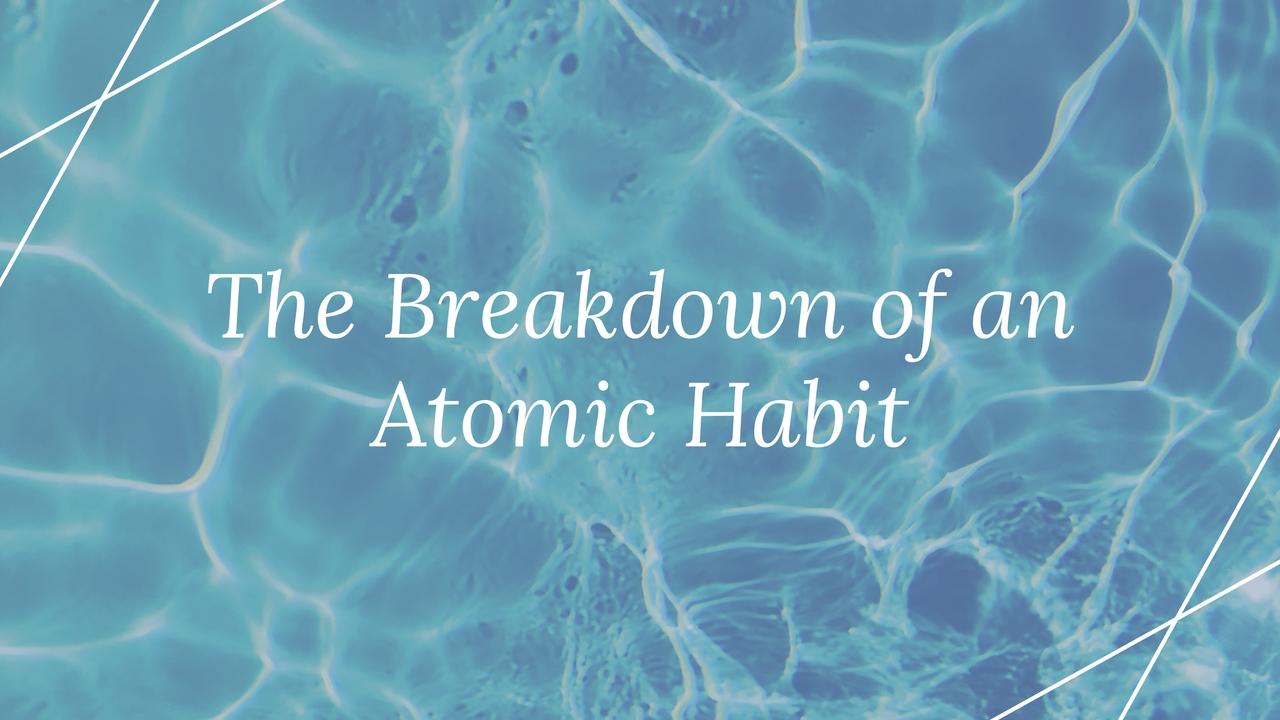 The standard narrative about habit change and other facets of high performance is that you need to set a goal and work extremely hard towards achieving that goal. And if you don’t succeed it’s because you don’t have the grit, determination, or the persistence to see it through. Internally, these narratives can typically sound something like, “Well, maybe I just don’t want it badly enough” or “I don’t have the willpower to achieve that kind of goal.”

But research on human behavior shows that many of the actions we take each day are simply a response to the system we’ve built around ourselves. As confirmed by James Clear, author of Atomic Habits, he explains that if you’ve developed some poor habits or you’re having trouble shifting them, it’s not because of you, it’s because of your system.

Together, these factors help to build a better system that promotes good habits effortlessly and allows you to achieve your goals as a natural consequence of the system design.

There is a significant psychological benefit to this approach: If my bad habits are about me and my inability to make change or progress, it’s easy to default to a victim mindset and resign to failure. But if bad habits are a result of a faulty system, something external to me, I can depersonalize the struggle and objectively assess how to affect positive change.

This is important because the feeling of making progress is a highly effective motivator. When we are paralyzed by guilt or routinely blame ourselves for a lack of progress, our productivity plummets. By making the process of behavior change external and actionable, we create opportunities to develop momentum and cultivate an upward spiral effect of positive emotions like motivation and engagement.

Clear’s philosophy on habit change is rooted in three primary pillars based on the word atomic:

With this philosophy in mind, let’s consider two common habits many people wish to change: not exercising and eating poorly. How can you leverage the pillars of atomic habits to create a system that will maximize the odds of achieving your goals? Based on his research, Clear suggests two simple ideas:

Scale Down Your Habits Using the 2-Minute Rule

Take your lofty goal and scale it down to something you can do in two minutes or less. For instance, change your goal from “practicing yoga four days a week” to simply “rolling out your yoga mat and starting a pose.” This may seem nonsensical at first and your brain will likely resist by arguing that such a small action will never amount to goal attainment. But this step is about mastering the art of showing up. A habit must be established before it can be improved; it must be the default standard before you consider how to optimize it. This is the opposite of how we typically approach behavior change. Ordinarily, we search for the absolute best way to achieve a goal and set out to complete that strategy. In so doing, we often set ourselves for failure from the get-go by overlooking the necessity of establishing a realistic baseline upon which we can improve. The 2-minute rule helps to lay that foundational baseline.

Restructure your physical environment so that your desired habits are more obvious, available, and frictionless, whereas your bad habits are invisible, difficult, and unsatisfying. For instance, if your poor habit is to be sedentary and binge-watch Netflix, hide your TV inside of a console so it’s less visible. You could also remove the batteries from the remote control so it creates more friction to follow through, or unplug the TV after each use and only plug it back in if you can identify the name of the show or the episode you intend to watch. If you want to incorporate more healthy snacks into your life, start by keeping them on your kitchen counter so they are visible instead of tucked away in a cupboard. Don’t place them directly next to a less healthy option, instead put them in the back corner of the pantry or on a high shelf that requires you to get a step stool. If you want to hit the gym or a class before work, pack your exercise clothes the night before to minimize effort in the morning. Plan to meet a friend so it’s harder to back out at the last minute. The essential part is to put your desired habits on the path of least resistance and to increase the difficulty of engaging in your bad habits.

Why Do These Tactics Help Build Positive Momentum Towards Long-Term Habits?

First, Clear describes habits as the compound interest of self-improvement: In the same way that money multiplies through compound interest, the effects of your habits multiply as you repeat them over time. For example, saving $100 towards retirement this month doesn’t feel like a big step towards a robust retirement fund, but consistently repeated over time, this habit will generate real wealth. The micro benefits of seemingly insignificant habit changes have a compounding effect that leads to remarkable results in the long run.

Second, small habit changes often have a positive ripple effect into other areas of our lives. Although weight loss might be your primary goal for making exercise a regular habit, doing so can also improve the quality of your sleep, which in turn improves your energy levels the following day. In addition, consistent exercise often produces a post-workout liveliness that stokes all around motivation. It can help you follow through on unrelated tasks and also tends to inspire healthier food choices. Improved eating habits, increased energy, and greater productivity were not the intended goals of making exercise habitual, but they quickly become the positive byproducts of small changes to a single habit.

Habit change can be a frustrating and fruitless process. Lack of consistent follow-through often leaves people feeling discouraged and hopeless about their ability to perform. The key to maximizing your potential, and leveraging the powerful framework of atomic habits, is to redesign your external operating system in order to optimize your behaviors. Over time, this simple but profound shift will help you better achieve goals you didn’t think possible and improve your overall level of high performance.

Jess Hopkins is a Positive Psychology coach, speaker, and trainer, working to maximize workplace well-being and performance. As a twice-certified Life Purpose and Career Coach, with dual Master's degrees in Counseling and Applied Positive Psychology, Jess is committed to affecting positive change within organizations that are driven by passion and purpose. For more information, please visit www.ThrivingWorkforce.com