Create Your Own Brand of Creativity 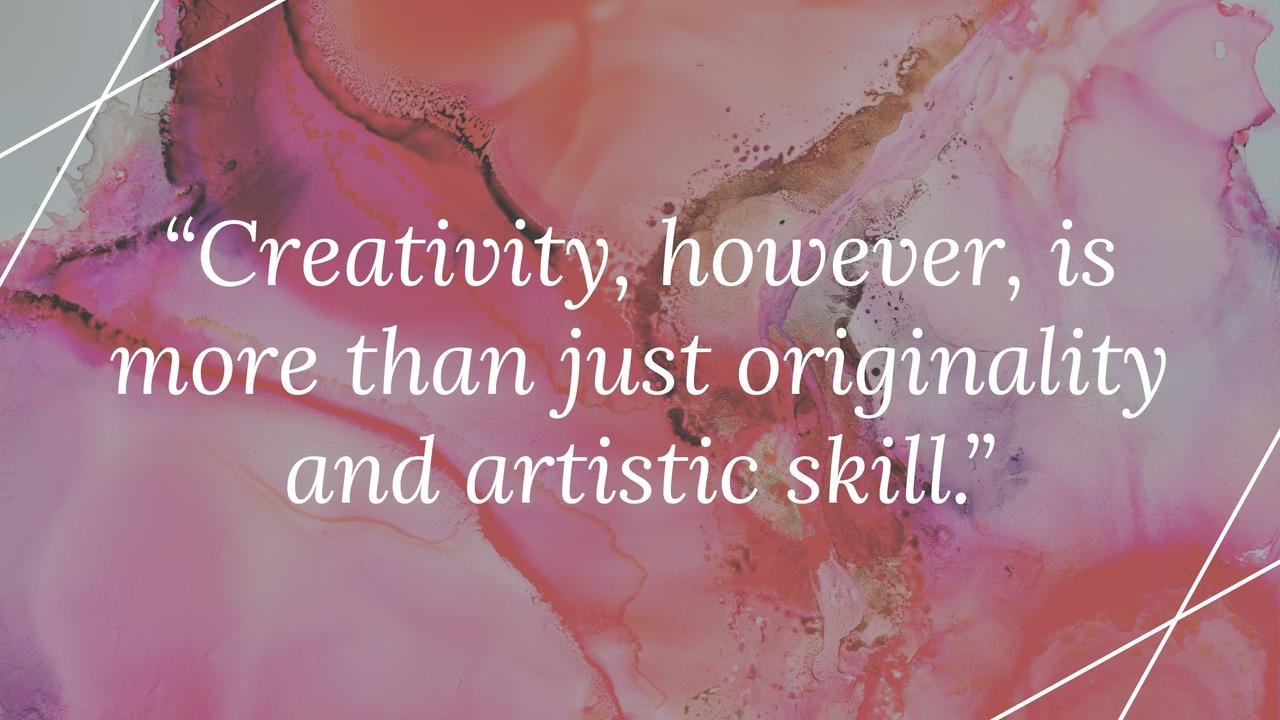 When I teach the science of positive psychology to students, they sometimes get confused. Specifically, they tend to stumble over two seemingly contradictory points. On the one hand, studies reveal that having a “growth mindset” is helpful. That is, believing you can improve on personal qualities such as intelligence or athleticism. On the other hand, people also harbor a strong intuition that personal growth must not be exactly the same for all people and in all areas. Sure, you could improve with a couple of cello lessons but Yo-Yo Ma almost certainly fared better during his initial lessons.

One place this tension rears its head is in the topic of creativity. Make no mistake, all people have some amount of creativity even as they have some modicum of humor, intelligence, and empathy. Even so, it is pretty clear that there are real differences between people in how funny, smart, or compassionate they are. The same holds true for creativity. What then, is the truth about the degree to which each of us can learn creativity? Is it worth the effort?

Part Two: What is Creativity?

Let’s linger on the big points of creativity before diving into your specific penchant toward this quality. First, let’s spend a second defining creativity. When many people think of creativity their minds jump immediately to technical skills such as being able to draw or paint artistically. Either that, or they conclude that creativity is synonymous with originality. The filmmaker Christopher Nolan is an example of this type of creativity because he broke new ground by writing an entire film plot in reverse. Similarly, the historical figure, John Harrison, revealed his tendency for unique thinking when he solved the problem of accurately determining longitude by re-envisioning how watches were constructed. Creativity, however, is more than just originality and artistic skill.

Modern scholars who study this fun topic often talk about “types of creativity.” Although they don’t always agree on the number or names of these types, they generally think of creativity as being both a way of thinking and a set of skills. In terms of creative thought, researchers point to “divergent thinking,” “problem solving” and “synthesis.” Divergent thinking is original, out-of-the-box, and inspired. When people had the idea that private cars could be used as a de facto fleet of taxis (ride sharing), this was an original thought. Problems solving, by contrast, uses creativity in a focused way.  People suffered for centuries from smallpox, for example, until some folks had the idea of “Variolation”: exposing people to small doses of smallpox might help them later withstand a larger exposure to smallpox. This technique worked and later became the basis of vaccination. Last, “synthesis” creativity is the ability to connect seemingly unrelated ideas. This comes about when people notice patterns or potential relationships. An example of this can be seen in the fax machine, which merged telephone technology with printing technology.

Let’s take a moment and come up for air! That was a lot of information. Interestingly, having creativity laid out in such simple terms can go a long way toward de-mystifying it. Instead of thinking of creativity as a rare trait reserved for Picasso or Marie Curie, you can see that it has a more everyday quality. You might even see a bit of yourself in one of these three types of creative thinking. If so, this brings us right back to where we started: the question of whether you can develop your creativity in your quest for greater success.

If you recall, many studies reveal that it is helpful to have a growth mindset. People who believe their traits are potentials that can be developed through effort often fare better in many ways than do those who think of traits in an all-or-nothing way. Kids who view their smarts as a skill to be cultivated, for instance, tend to outperform their peers who think that intelligence is either something you’ve got or something you don’t. In all honesty, each of us has a growth mindset about some of our own qualities and a fixed mindset about others. Personally, I believe I could improve dramatically at drawing, at speaking Spanish, and at conducting statistical analyses if I put in the effort. On the other hand, I suspect I could make almost no traction whatsoever in cooking or singing no matter how much practice and mentorship I had. You also likely have areas you see as potential for development and others you dismiss as hopeless.

Hopefully, you had some fun filling out these sentences. There are, of course, no right or wrong answers to each (for a deep discussion feel free to read the appendix at the end of this post). It may have occurred to you that the three parts—A, B and C—were assessments of the three distinct types of creative thinking: originality, problem-solving, and synthesis. If you found one of these three sections easier and more enjoyable then that is probably indicative of which type of creativity you naturally gravitate towards. Of course, it may be that you enjoyed all, or none, as well.

On the assumption that at least one of these three areas “spoke to you” more than did another, we are left with the question of whether you can improve in that area. I argue here that you can. In fact, I would argue that you stand to improve more in the area of creativity that comes naturally to you than an area that isn’t really your cup of tea. That makes sense: you will experience more expertise, enjoyment and motivation in your natural area.

Now that you know which brand of creativity you lean toward; you can let yourself off the hook for not being an all-around creativity. Have a hard time seeing patterns? Go ahead and forgive yourself! You aren’t full of original ideas? It’s okay! Feel free to claim your natural corner of creativity. Say to yourself, “I may not be artistic but I am a competent problem solver” or “I don’t always see the solutions, but I am good at seeing patterns and connections.”

Once you accept your brand of creativity and—by extension—yourself, you can put in effort to improve your creative thinking. There are many potential avenues for this and I will focus on only three here:

Like many psychological qualities, creativity is no guarantee of success. Even so, the ability to generate ideas, solve problems, and spot patterns can pave the way to better work and relationships. Understanding your own type of creativity, practicing it, and learning to better evaluate your own ideas can be both fun and increase effectiveness. Enjoy!

Let’s be honest, this is a short blog post intended to educate, inspire and entertain. The complete-the-sentence task contained here is not a professional psychological instrument that has been tested for validity or reliability. Instead, it is intended to give you a general idea of which of the three types of creative thinking you enjoy the most and which comes most easily to you.

Let’s start with Part A. Part A represents an assessment of divergent thinking. Although there are no right or wrong answers, it should be apparent that some answers appear more original/divergent than do others. For example, if you completed the statement, “Yesterday, I purchased a……” with the word “sandwich” that might seem less divergent (and less interesting) than “Yesterday, I purchased a velvet painting of Beyoncé.” People who are good divergent thinkers can produce ideas that are less common and more unique. Perhaps Jim’s diary said, “I know you are reading this and I am standing right behind you!” Perhaps a dog is “a good place to dry your hands after washing them.” In each of these cases, you can see that the uniqueness of the answers reflects an ability to produce ideas that others might not.

Moving on to Part B. Part B, as you might have guessed, is an opportunity to showcase your problem-solving acumen. Here, again, you can see that there are more and less creative answers. If, for example, your solution to skateboarding teams is to shake your fist at them and yell, “get outta here, ya damn kids!” Well. You might not be a stellar problem solver. If, on the other hand, your solution included piping Chinese opera music out to the sidewalk then that might feel a bit more creative (whether or not it works). You get the idea.

Finally, Part C is about seeing similarities and patterns where others might not. This “synthesis” type of creative thinking is cool but not everyone can do it. The first question asks you to detect similarities between flight (moving through air) and swimming (moving through water) and then to compare that with two other things, the first of which is “eagle.” You could say that eagles are animals who move through air and so you must then find an animal who moves through water. An obvious answer would be “fish.” But an aquatic animal that is more comparable to an eagle is a shark. The next two statements require you to consider the elements and essence of something and then to compare it to something else. For instance, which part of the house is the human heart most like? Perhaps you landed on the idea that the heart is among the most deeply placed organ and so the room that is in the center of the house is most similar (a windowless bathroom on the main level, perhaps?). Maybe you focused on the fact that the heart send blood all around the body and so you chose the room with the circuit breaker that controls the flow of electricity to each room. Or maybe you thought of the heart as a metaphor for that which we treasure most and in this case a baby’s nursery or an office safe might an appropriate answer.

However, you approached these there is a likelihood that you found one part slightly easier and more enjoyable than you found the others.