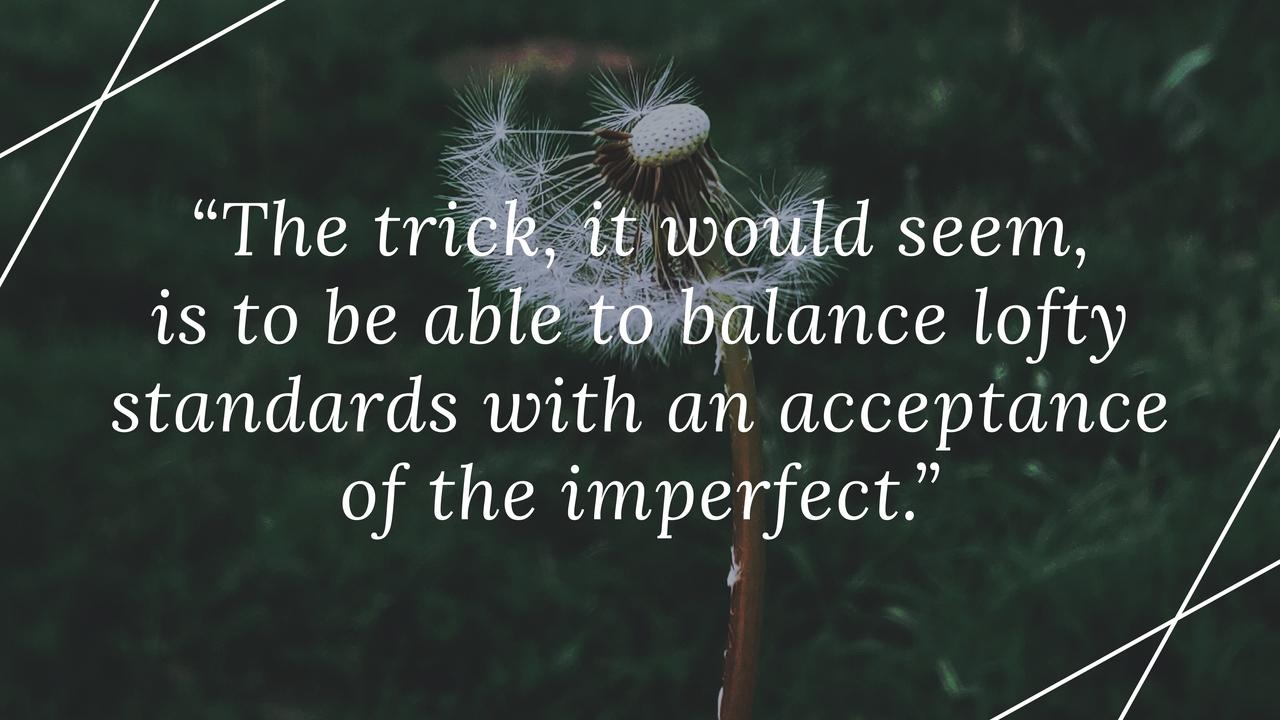 I want you to imagine the following scenario. This is a true story, but I am fudging a few of the details to protect the identity of a friend of mine. I want you to imagine having the money to upgrade every element of your kitchen. Ever dreamed of seating for 12? Granite countertops? Expensive chrome appliances? My friend could afford all of these things and he took his outdated kitchen and modernized it. He had contractors remove the old wall-mounted telephone and install handsome wood cabinetry. He ordered a large kitchen island and beautiful floor tiles. In fact, he had so much work done that he went on vacation for two weeks to give the crews the space they needed to transform his home. When he returned, he dropped his suitcases in his entryway, and his mouth fell open. You might think that he was delighted by the state-of-the-art room before him but, no. Instead, he was upset that the floor tiles had been laid out on the diagonal—like diamonds—rather than vertically and horizontally—like a tic-tac-toe board. His dismay turned to rage and he called me to come look at the horror that was his kitchen floor.

I arrived a short time later and—I’ll be honest—I thought his kitchen looked fantastic. The dark wood, the shiny dishwasher, the stone counters. And, yes, the cool tiled floor. “Looks terrific,” I told him, honestly. My friend, however, had a hard time getting over the error. It was close to perfect, he admitted, but then followed up with “close to perfect might as well be a million miles from perfect.” It was when he said this that it dawned on me that my buddy is a perfectionist. He is very particular about how things are done, he expects a lot from everyone, and he tends to be hard on himself as well. His high standards pay off in a way: he is excellent at his job and makes enough money to have a great—albeit imperfect—kitchen. On the other hand, he is sort of miserable and dissatisfied all the time.

The trick, it would seem, is to be able to balance lofty standards with an acceptance of the imperfect. It is the ability to distinguish between the desire to excel and the desire to never, ever make a mistake. This is easier said than done. Fortunately, a growing body of research on perfectionism can help you avoid the perils of perfectionism while still be excellent.

Part One: A Job Well Done

You might recognize some of the psychological tendencies of perfectionism: a strong preference for order, feeling that others—especially parents—have high expectations for you, and a tendency to beat yourself up when you make mistakes. Psychologists define perfectionism as having separate but critical components. First, it includes a slavish adherence to very high standards of performance. That, by itself, is not really a problem. I can point to classic works of art and architecture and say that I like them because of their extraordinary merit. Those high standards only become psychologically harmful when I engage the second aspect of perfectionism: a tendency toward being overly self-critical. When I start beating myself up because I cannot paint like Picasso or design like Frank Lloyd Wright, that is when I begin to feel pretty unhappy.

Interestingly, perfectionism is getting worse. Yep, you’d think that it was just a personality characteristic that hasn’t changed much over time. You can imagine Julius Ceasar walking into Marc Antony’s kitchen and saying, “Buddy! It looks great! A little problem with the floor tiles isn’t something to stab someone over.”  And yet, researchers have recently discovered that perfectionism is on the rise. Specifically, social scientists in England investigated the course of perfectionism over the last 25 years. They looked at nearly 200 published studies and found that college students seem to be harder on themselves and expect more than ever before. This tendency is especially pronounced in American college students (contrasted with their British and Canadian counterparts; although those two groups also saw significant gains in perfectionism).

The researchers suggest a number of societal factors that might help explain this trend. First, they argue, parents are placing increasing stress on their children by becoming more heavily involved in their performance at school, in sports, and in extra-curricular activities. Second, people have rising expectations for themselves. My grandmother aspired to owning a home. My parent’s generation “made it” if they owned a vacation home. My generation is outpacing our parents’ income. For Millennials, however, the stakes are huge: everyone is expected to have traveled widely, have a solid education, make money, and have a job dripping with fulfillment. To make matters worse, the newer generations are doing all of it “on stage;” the stage being social media where every vacation, cocktail dress, and dinner is held out for a public vote. It used to be that just Ceasar gave a thumbs up or down.

It may not be entirely coincidental, then, that anxiety and other psychological maladies are on the rise. It has all the hallmark features of unhealthy thinking: a tendency toward black-and-white and all-or-nothing categories, unrealistic expectations, and sensitivity to the slightest errors. Researchers have linked perfectionism to body dissatisfaction, eating disorders, social phobia, depression, and anxiety.

For the struggling perfectionist, a happier life is largely in shifting one’s state of mind. It can be difficult to do, however. Perfectionists are likely to hear phrases such as “good enough” in the same way that I hear the discordant clanging cymbals of Indonesian gamelan music. Sure, I can appreciate that it exists, but I don’t really love it for myself. The trick, then, comes in the ability to lower one’s standards without it also feeling like one is capitulating to poor quality.

To do so, it makes sense to distinguish between “perfect” and “really good.” If you plan a birthday party for a friend, write a report at work, or set a little money aside for summer vacation, these are activities you want to do pretty well. You want that birthday party to be really good, and you want the report to be free of major flaws, and you want to be effective in your savings so that you can, in fact, take a vacation. But you don’t need perfection. If you forget your present and give it to your friend later it is not the end of the world. If you misplace some punctuation your report is still readable. If you skip on savings one week you are still going to be able to vacation, but maybe it will be a day shorter.

You get the idea. You’re smart. I can already sense you wanting to be the best non-perfectionist in the world. By this point you probably agree that perfectionism isn’t doing you any favors and you really want to nail an alternative. In fact, you want to get this change exactly right!

To do so, try experimenting with imperfection.  Yes; try making mistakes. I know! This sounds absurd, especially if you are a heart surgeon or a race car driver. When I advocate making mistakes on purpose, I am talking about low-stakes mistakes. Try leaving a spelling error in a report or returning a library book a day late. These small experiments can be helpful for a variety or reasons. First, they can reveal how small mistakes are actually less toxic than you imagine. Second, they can act as a pressure release valve; effectively letting you off the barbed hook of perfection so that you can focus on the more serious business of high quality.

I have done this myself in my professional presentations. Once, I left incorrect punctuation in a title slide of my Power Point. I was presenting to a group of teachers and they were quick to take out their metaphorical red pens and draw the mistake to my attention. Weirdly, knowing that it wasn’t going to be a 100% perfect presentation allowed me to relax and have fun. I have also allowed a friend to place random slides into my presentation deck. Instead of a polished, well-rehearsed presentation where every joke is measured, my audience was treated to a moment of confusion and embarrassment when a surprise slide emerged. It turned out to be a hilarious moment and one of the highlights of the meeting.

Last, I would linger on this point and ask that you remind yourself that small mistakes, improvisation, and surprise offer us some of the most delicious moments we will ever experience. And, more often than not, they do so without compromising overall quality. So, go for it. Strive high, but not too high.